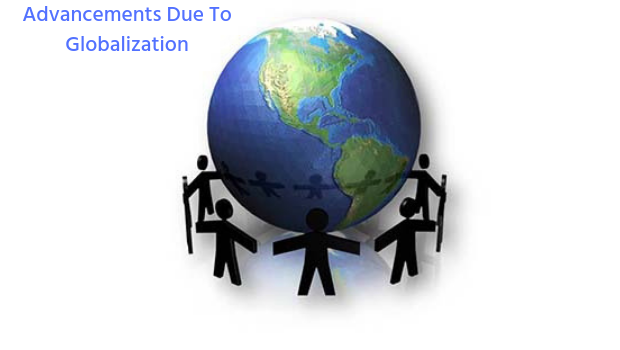 Globalization is a term which is used for over years which increases the new technologies and new ideologies into our country. Let me discuss in detail about advancement in the technology, growth in tourism activities, changes in the job market, change in the standard of living and integration of different culture with the effect of globalization. The foreign investment is subject to import duty, export taxes and quantitative restrictions. The WTO says that India is restrictive with the import restrictions. Let me discuss in detail about the advancements due to globalization and business in India.

The microchip with 100 billion-fold improvement in 40 years is now faster and cheaper. The cost of an e-book is zero whereas the cost of the book after the shipping and printing are comparatively high. The GPS and internet with platforms such as Google, Apple, and Amazon are introducing many new things in the globalization. From the mobile phones to the GPS satellites are bringing in so many new inventions in the technology. The wide range of features in the smartphones also shows the influence of the globalization in India.

The young population in the world is around 1.8 billion and there is a wide range of awareness about the destinations around the world with the young population. So, the tourism industry is tremendously undergoing changes in India. Tourism is the largest industry in the world with 10 percent of the world GDP. Around 240 million people worldwide are employed in the tourism industry which made tourism and hospitality as the most loving profession. Globalization is bringing in the foreign money and the capital transfer aid for the growth of the economy.

The job market and globalization

There is unemployment in the US with 4.6 percent. When compared to the domestic market the global market is paying the high salary. Translators, market research analysts, IT professionals and customer service representative are some of the jobs created because of the globalization. Knowing multiple languages like Japanese, French, Chinese, Spanish, and Arabic is a good choice to become a successful translator. As a result of globalization, the earning capacity has increased, the standard of living is high and there are the job opportunities in the global market.

Standard of living and Globalization

Globalization creates competitive prices. For the big brands, globalization has a good impact. The huge global market is coming to India in the form of e-commerce companies like Amazon and flip kart. The competition is high and the pricing model is also different due to the impact of the globalization. The local market and the international market should be respected equaly. The Indian government has some proposal to ban the online purchases as it leads to less profit for the local sellers.

As a result of globalization the Thai, Chinese, and Mexican restaurants are widespread in India. Enjoying the cross culture in form of food and cosmetics is good for the unity among the countries. It also brings in the health concerns as the habit and the habitual trait is different from country to country. The climatic condition and the food should go hand in hand. The globalization is the reason why yoga is famous in foreign countries. Thus globalization leads to competition and enhances creativity in the multiple industries around the world.